1.616.874.7894 mrgreenhill@gmail.com
Follow the links to purchase an audiobook narrated by Dr. Greenhill. 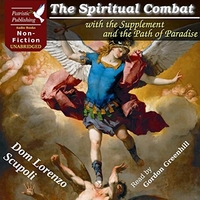 Including the Supplement and the Path of Paradise

Genre – Theology, Spirituality, Holiness
Length – 6:38
The Spiritual Combat is considered one of the two greatest ascetic classics, the other being The Imitation of Christ. The authors of both are shrouded in mystery. There are many 17th-century editions which have the name Spanish Benedictine, John of Castanzia. Some Jesuit writers have ascribed the book to the Jesuit Achilles Gagliardi. However, most critics consider Fr. Lawrence Scupoli the author. The aim of the work is to lead the soul to the height of spiritual perfection by constant struggle against our evil nature, which wants to keep us away from that end. 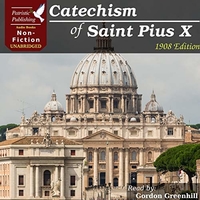 The Catechism of St. Pius X

Genre – Theology, Soteriology
Length – 5:07
Pope Pius X’s catechism is a rather short book in which he provides a Roman Catholic understanding of the Christian faith with a question and answer format. The book was issued in 1908, and was reaffirmed by Ratzinger in 2002. The book has three parts dealing with faith, the Ten Commandments, and grace. It also lists the most important prayers for Catholics.

Genre – Theology, Apologetics
Length – 7:25
“How can we contrive to be at once astonished at the world and yet at home in it?” And with that question, G.K. Chesterton recounts the heart of an intellectual journey that took him from the edges of a nihilistic pessimism into the center of the paradoxical joy of Christian orthodoxy. His book is not a defense of the Christian faith, at least not primarily, so much as an attempt to explain how the startling paradoxes and sharp edges of the creed explain everything else.

Genre – Theology, Soteriology
Length – 3:31
These promises are for every believer yet each will admit to not fully experiencing what is promised. Spurgeon helps us to appreciate that all God’s promises are the birthright of each Christian. It is not presumptuous or unreal to expect to enjoy what God has promised. We are to measure what God can do by his generous promises, not by our level of expectation. Spurgeon had the gift of getting right to the heart of a matter in a style that was memorable and profound.

Genre – Spiritual Biography
Length – 12:43
The son of a pagan father and a Christian mother, Saint Augustine spent his early years torn between conflicting faiths and world views. His Confessions, written when he was in his forties, recount how, slowly and painfully, he came to turn away from his youthful ideas and licentious lifestyle, to become instead a staunch advocate of Christianity and one of its most influential thinkers. A remarkably honest and revealing spiritual autobiography, the Confessions also address fundamental issues of Christian doctrine, and many of the prayers and meditations it includes are still an integral part of the practice of Christianity today.

On the Incarnation of the Word of God

Genre – Theology, Christology
Length – 4:19
​”On the Incarnation of the Word” is an early treatise written by Athanasius (4th AD), one of the most deft theological-philosophical thinkers in the early church. C.S. Lewis believed it an essential read for the modern believer. Although Athanasius exhibited such unusual genius, his writing style and arguments are surprisingly easy-to-read. This text is just as potent for Church dogmatics today, since the doctrine of Christ’s incarnation has always been under attack. Though under the discerning light of this treatise, these controversies simply show themselves to be the age-old heresies which Athanasius grappled with.

The Imitation of Christ

Genre – Spiritual Direction
Length – 6:51
The Imitation of Christ is one of the best known Christian books on devotion. Through its realistic delineation of the complexities of human existence, and in its soul-building optimism about the benefits of aspiring to a Christ-shaped life, The Imitation of Christ is a Spiritual Classic. Although written early in the fifteenth century, the many short meditations that comprise this work remain strikingly fresh and relevant for modern readers.

Genre – Theology, Soteriology
Length – 3:53
​Charles Spurgeon is one of the great preachers in the history of Christianity. Spurgeon also communicates brilliantly through the written word, and his giftedness to proclaim the doctrine of grace shines in his little gem, All of Grace. This short book is one of the bright jewels in post-apostolic writings on grace.

Genre – Theology, Spiritual Direction
Length – 15:00
Anglican Bishop Ryle was convinced that true holiness is not simply a matter of believing and feeling, but of practical doing. As relevant today as it was 130 years ago, his masterpiece focuses on the daily details and difficulties of holy living and exhorts believers to strive after sanctification, not passively wait for it.

Genre – Theological Allegory
Length – 11:55
Often rated as important as the Bible as a Christian document, this famous story of man’s progress through life in search of salvation remains one of the most entertaining allegories of faith ever written. Set against realistic backdrops of town and country, the powerful drama of the pilgrim’s trials and temptations follows him in his harrowing journey to the Celestial City. An enormously influential 17th-century classic, universally known for its simplicity, vigor, and beauty of language, The Pilgrim’s Progress remains one of the most widely read books in the English language.